The Valleys of Oregon Wine: Willamette, Rogue, and more

There’s nothing flat about West Coast wine. California and Oregon wine country is characterized by mountains and valleys that keep our microclimates interesting.

Napa Valley may be the USA’s most famous wine region and the Willamette Valley is Oregon’s… so far. Oregon is so much more than just Pinot Noir. Read on to discover what you should drink from where.

Winkler Index Zone: II in a cool year, IV in a hot year, and generally in between.

What You Should Drink: Tempranillo, Syrah, Viognier, Malbec.

The Rogue Valley (home to Resistance Wine Co) is actually three valleys: Bear Creek, Applegate, and Illinois. All three valleys are just north of the California border, inland from the Pacific Ocean and part of the Siskiyou mountains. The Applegate Valley is its own AVA (American Viticultural Area, which is a federal designation). It wouldn’t be a surprise if other subregions of the Rogue Valley were to petition for their own Southern Oregon AVAs in the future due to their distinctive features.

The Illinois Valley is relatively cool and Bear Creek Valley bakes in the summer. All are dry- there is almost no measurable rainfall between June and September, and most years find us at varying levels of drought.

Flatter, lower-elevation sites are good for early-ripening varieties, thinner-skinned varieties, and rootstocks that thrive with higher soil moisture like Sauvignon Blanc, Cabernet Franc and Pinot Gris. Southern- and western-facing hillsides get more direct sunlight and do so earlier in the spring; northern- and eastern-facing slopes have less direct exposure. The valley floor is hot during the day and cool at night producing some great Rogue Valley wine.

Basically, we can find a site in the Rogue Valley to grow just about any grape variety. And because the Rogue Valley is a patchwork quilt of small, family-farmed vineyards sprinkled across the three valleys, it continues to be a great adventure finding vineyards that have successfully matched varieties to their sites and are producing stellar winegrapes. To date we have zeroed in on multiple sites for Syrah and Malbec for red wine, plus Merlot for rosé. Stay tuned for new additions coming in vintage 2021!

For our part, we have planted Syrah on our own southeast-facing slope in Ashland (Bear Creek Valley) at 2,000 feet. In a few years we’ll see how it turns out! 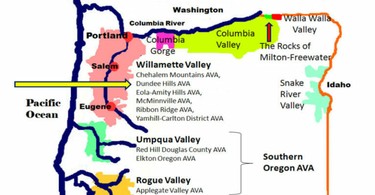 What You Should Drink:  Pinot Noir, Chardonnay, Gamay, sparkling wines.

What Else is Here:  End of the Oregon Trail, Salem, Portland, marionberries & microbreweries, waterfall hikes.

The Willamette Valley occupies the interior northwest corridor of Oregon along the Willamette River, about a three hour drive from Resistance Wine Co’s home base in Ashland.

The Willamette Valley has a gentler, more moderate climate than the Rogue Valley. Most vineyards are planted on flat land or gentle slopes, slightly above sea level.

Budbreak happens a little later in spring, summers are cooler, and there is substantially more rainfall. As a result, many vineyards require no irrigation at all. The soils are relatively fertile and deep, and the valley supports other crops besides winegrapes: berries, orchard fruit, Christmas trees, and turf grass, to name a few.

The gentle conditions of the Willamette Valley are hospitable to thin-skinned Pinot Noir, cool-weather expressions of Chardonnay, and early-ripening Gamay (which you may know as Beaujolais). The valley’s cool climate also makes for good sparkling wine, for which grapes need to be harvested with high natural acidity and low sugars.

You thought this was in Washington, didn’t you? Well, you’re right, but the Walla Walla AVA includes land on the Oregon side of the Columbia River, too. This valley is further inland than the Rogue and Willamette valleys, and seasonal temperatures are more extreme without the moderating oceanic influence. This is Syrah and Cabernet country.

This umbrella region includes Walla Walla, and also lies mostly in Washington, spanning the Columbia River to include a small piece of Oregon. While its Washington counterpart tends toward large-scale farming operations, the Oregon side comprises smaller vineyards and wineries.

Named for the tribe that has inhabited this area since before Hudson’s Bay traders laid eyes on it, the Umpqua Valley is also called “The Hundred Valleys of the Umpqua” for its super-varied terrain. The Umpqua Valley is nestled in between the Rogue and Willamette valleys both geographically and in terms of growing conditions (elevation, average temperature, rainfall, etc.). No one grape variety predominates here thus far.

Yes, Oregon can share with Idaho, too. The Snake River Valley lies along Oregon’s eastern border with Idaho and is another AVA that, like Walla Walla, transcends state borders. And while the Snake River Valley shares the same latitude as the Umpqua Valley, its inland location, high elevation and lower rainfall make for dramatically different growing conditions. Riesling is the most-grown variety here, though not by much.