How does anybody end up in Washington, D.C. in 1995? With Marion Barry, the financial control board, and the requirement of moving in packs—it was a tough sell. Maybe they move for college and stay. Or perhaps they move for a job and stay. Some of them get elected—even if not by a majority of the popular vote… 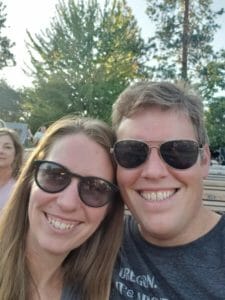 Kirk and Kimberly Drake were in the first category. They met in college in D.C., and after Kimberly finished law school, they got married and bought a fixer-upper in an “emerging” neighborhood downtown. Kimberly started her legal career and Kirk founded a financial technology company. They renovated the house. They dealt with the car break-ins, the needles on sidewalks, and the whole not-being-represented-in-congress thing. The restaurants, the art, and the edgy theater scene were more than enough to make up for it.

Kimberly practiced corporate and securities law, first at a large firm, and then at a large in-house legal department. It was interesting work, but all-consuming. Long hours, painful commutes, same business casual uniform every day. She recalls being stuck in Snowmageddon traffic for seven hours one winter because she was absorbed in drafting a document and had no idea that it was snowing.

Meanwhile, Kirk was helping credit unions enter and navigate the financial technology space. He co-founded several companies in the region, joining the vibrant entrepreneur community there, and making a name for himself in his industry. But breakfast meetings, dinner meetings, and frequent travel to the west coast kept him away from home often.

Kirk and Kimberly found that they were passing like ships in the night, and life in D.C. started to feel like running on a treadmill. They had three children, and they started to have misgivings about the air quality, traffic, waitlists for everything, and indoor lifestyle of the city that had picked them.

Something had to change.

The first spark of resistance was ignited.

Why We Moved to Southern Oregon

Hey, if you like reading about wine, you’ll definitely enjoy drinking it. Check out the Resistance Wine Company’s best bottles!